If you are using Windows Server 2012 R2 and configured NIC Teaming you could have this Event ID : 16945

This is showing up as a Warning in the event log.
What the event is saying is that you have a host vNIC (virtual NIC presented to the host that is connected to the Virtual Switch)
That has the same MAC address as one of the NIC (physical NIC) members of the NIC team.
This shouldn’t cause an issue as long as the team member that has the same MAC as the vNIC remains in the team. If that team member is ever removed from the team and attempt standalone operation with that MAC then there could be duplicate MAC address on the network assuming the vNIC is also in operation. 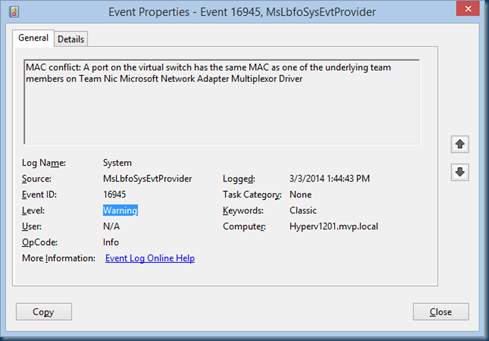 What is NIC Teaming?

A solution commonly employed to solve the network availability and performance challenges is NIC Teaming. NIC Teaming (aka NIC bonding, network adapter teaming, Load balancing and failover, etc.) is the ability to operate multiple NICs as a single interface from the perspective of the system. In Windows Server 2012, NIC Teaming provides two key capabilities: 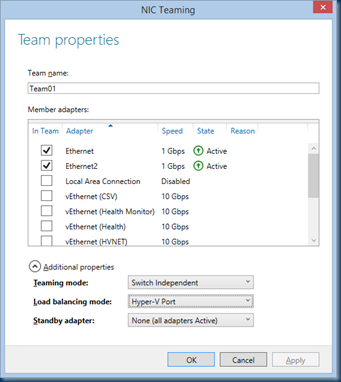 You can see a all the vNIC/pNIC and MAC addresses by doing a “get-netadapter | sort macaddress” in PowerShell.
You should see one of your physical NIC and a virtual NIC called something like "vEthernet" and both will have the same MAC.

But what If I change the MAC of the Team by looking at the properties of the team interface (in Network Connections, "Microsoft Network Adapter Multiplexor", then click the Configure button, then select the Advanced tab.
The 7th item in the list is MAC Address. You could configure a MAC there for the team. 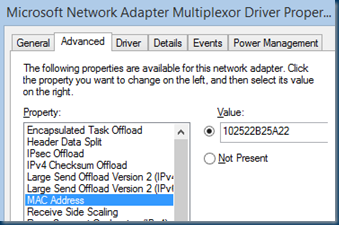