Overview of Windows Server 8 Hyper-V 3.0 features What it is and what you can not do.

The Windows 8 client hyper-v 3.0 role is not the same as the Windows Server 8 Hyper-V Role. If you look at one item in particular the File channel than there is a change first it was not in windows 2008 R2 ! you can now do npiv this is great mount direct FC Lun’s to your VM.  But first a preview of the fiber channel.

The virtual Fibre Channel feature in Hyper-V requires the following:

Virtual Fibre Channel for Hyper-V guests uses the existing N_Port ID Virtualization (NPIV) T11 standard to map multiple virtual N_Port IDs to a single physical Fibre Channel N_port. A new NPIV port is created on the host each time you start a virtual machine that is configured with a virtual HBA. When the virtual machine stops running on the host, the NPIV port is removed.

Now that we know what it does lets see how it works.

First in the settings you can add a fiber channel switch

You can also edit the adresses ( WWN )World Wide Node Names and World Wide Port Name ( WWPN) as known as port address, you can copy them to the clipboard with the copy command. 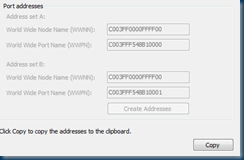 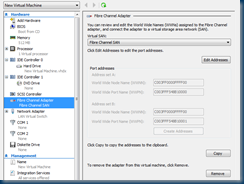 Synthetic Fiber Channel HBA’s is not supported on a client SKU that is on a windows 8 client. So I do not need support on my client

eh no it won’t run ! So think about this if you want to show this you need server. But remember is it a beta and it can be changed during the beta. 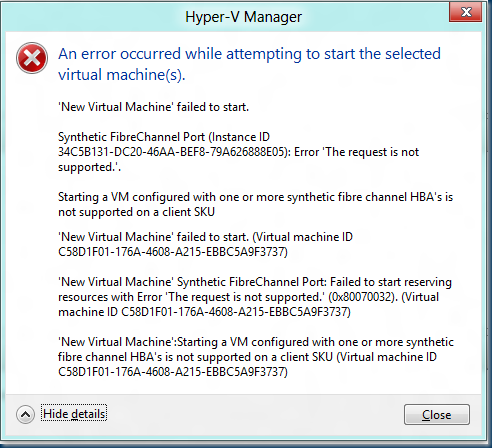 Why this is is unclear what else is different on the client lets find out in the next blogs. Well I run now Datacenter as hyper-v server

Well for starters you can’t upgrade a VHD that is running windows 2008R2 that is boot from VHD !

Upgrading an operating system in a virtual disk is not supported.

Think your plan ! rebuild your new machines is better than an upgrade is the microsoft message to avoid problems. and I must say it is much faster also.