Do you know the problem reboot your server and you can’t RDP to it but you can ping and if you are in the same subnet you can RDP ?

Well maybe you hit a bug , yes I was surprised to where is my DGW ? try bing and you find more of the same problems but easy to fix with a hot fix but why one server does this and others don’t ?

The default gateway setting is lost when you reboot the server

for some reason my LAN just suddenly lost its Default Gateway

my tcpip default gateway gets reset on reboot 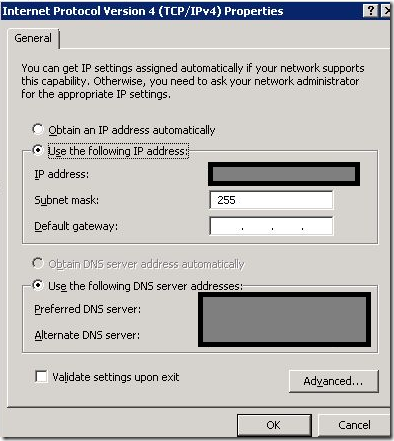 And if you looked it up in the registery

HKEY_LOCAL_MACHINESYSTEMCurrentControlSetServicesTcpipPara
metersInterfaces<GUID>DefaultGateway
Where <GUID> is the interface value for the network card.

It is not there , sure you can put it in but after a reboot it is gone.

No there is a hot fix for this.

Or you can reset the IP stack.

netsh: this is a Windows utility that allows one to display or change network settings locally or remotely.

int: this argument specifies that you wish to use the “interface” context within the netsh utility.

ip: this argument specifies that you wish to use the “ip” context within the “interface” context of netsh. An example of another context that could have been specified here instead would be “ipv6.”

reset: this argument is an instruction within the previously-specified context and subcontext means what it says, to reset to default.

In this scenario, the default gateway is set successfully. You can verify it by running the ipconfig /all command. However, the default gateway of the network interface is missing after the computer restarts. If you double-click the following registry entry, you find that a null character exists in the value data of the DefaultGateway subkey:

Note <GUID> is the interface value of the network card.

To work around the issue, use the following command to set the default gateway on the interface:

Go here to get the HOTFIX :

Well It sounds nice install SP1 and you get new features and it is SP1 greats new stuff for your Hyper-V server. But It can be a disaster for your server. Make sure you always got a backup of your server.! 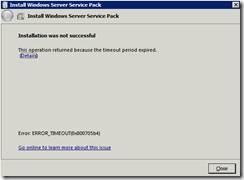 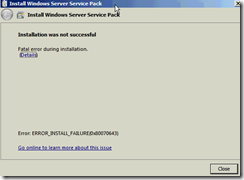 If you have the errors above and you are trying to logon to your server it is pending for uninstalling the Service pack and stays there forever. What can you do ?

Well you can boot in safe mode or get the ownership of the pending.xml and rename it.

take ownership if you need and rename this file.  Poweroff your server and you can logon again.

Easy but your server is fucked up beyond any repair

Now you think you can start the setup again and yes you can but the next error is “ Wait for the Windows Modules Installer  “ ?

yes see where the pending.xml file is ? well it is not there anymore. Just poweroff the server start in safe mode and reboot.

But what now ? This server is fried I have not found a solution to fix this or to recreate this issue. Next week I’m in redmond and will ask the Team how to solve this.

The problem is the HKLMcomponents hive is still loaded in the register. and you can’t do a unload. So therefor any update will fail. I has not finished the update the machine thinks it is still pending

Well this means I need to reboot the server.

So there is direct fix but you can use your server everything works but there is still a problem with this server.

hope this helps if I find a solution I will let you know.

You are receiving this invitation based on the quality of feedback you have provided on previous Windows programs and the Microsoft Windows release team would like you to participate in the Microsoft Windows 7 and Windows Server 2008 R2 Service Pack 1 (SP1) release program, to be available shortly, as announced at the Microsoft’s TechEd conference.

Accepting this invitation will allow you to access pre-release versions of the Service Pack for the purposes of validating the release readiness. We highly value your past feedback and know we can count on you again to help us build a great new version of Windows!

The SP1 release version is not available quite yet but we need to assemble a great team of program peers early so you are ready to go when we are! If you accept this invitation you’ll be notified when the release version becomes available.

What you will get if you choose to participate

What we will ask of you if you choose to participate

• Download and install Windows 7 SP1 or Windows Server 2008 R2 SP1 on at least one PC each
• File bugs if you encounter them as well as respond to surveys as you can.
• Validation we are seeking
o Set-up and installation
o Application Experience/Compatibility
o Device Experience/Compatibility
• We ask that you actively participate in discussions on the newsgroups and share your opinions with us and others