SCM is a free tool from the Microsoft Solution Accelerators team that enables you to quickly configure and manage your computers whether their located on desks, in traditional datacenter, or in a private cloud using Group Policy and Microsoft® System Center Configuration Manager. To learn more about the current version of Security Compliance Manager, SCM 2.5, visit the TechNet Library More info about SCM get it here.

Secure your environment with new product baselines for Windows Server 2012, Windows 8, and Windows Internet Explorer 10. The beta release of Security Compliance Manager (SCM) 3.0 provides all the same great features for these new baselines, as well as an enhanced setting library for these new Microsoft products. This beta release includes fixes that resolve many previously reported issues in the setting library. The updated setting library also gives you the ability to further customize baselines. SCM 3.0 provides a single location for you to create, manage, analyze, and customize baselines to secure your environment faster and more efficiently.

As part of a select group of our key customers, we invite you to participate in the Beta Review Program of these new product baselines that include security enhancements for the following server roles and features:

What is not available in this beta release

The ability to export compliance data using formats that work with the DCM feature in Microsoft System Center Configuration Manager and the Security Content Automation Protocol (SCAP) is temporarily blocked in the new baselines for Windows Server 2012, Windows 8, and Internet Explorer 10. This functionality will be enabled in the next beta release update.

If you perform a clean installation of SCM 3.0 Beta on a computer running either Windows 8 or Windows Server 2012 that does not also have Microsoft SQL Server software installed on it, you may receive the following compatibility warning message. 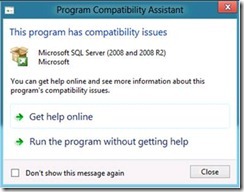 A setting named Configure Windows SmartScreen in the Windows 8 Computer Security baseline may not be set in the registry correctly after its Group Policy Object (GPO) is applied. This is a known issue in this beta release that will be fixed in the final commercial release of SCM. The workaround to resolve this issue is to disable or not configure this setting in the baseline before exporting the GPO.

If you export the Windows 8 Computer Security Compliance baseline into a GPO, import the GPO into SCM 3.0 Beta, and then export it to a computer running a Windows operating system earlier than Windows 8 and Windows Server 2012, an application exception message may appear. This is a known issue in this beta release that will be fixed in the final commercial release of SCM. The workaround to resolve this issue is to disable the setting named Configure Windows SmartScreen before clicking GPO Backup (folder) in the Export area of the Action pane in SCM 3.0 Beta.