With the new version of SQL server 2014 there are a lot of options possible for DR or some extra Configuration options.

In the Old days there was only a failover option in SQL active/passive or if you had multiple instances you could run a instance on every node this could be seen as active/active. en yes mirroring was also an option.

But now the naming is different and there are a lot more configuration options. Remember “ my SQL is running on bare metal much faster “ eh this is not that long ago.  Configurations with a Scale-out file server is not yet common but more and more configurations are using it. Now that SQL Server 2014 can store on CSV. In the following 3 blog post I will show you how to create all this bottom up. easy playground. A lot of terms will pass along like FCI WSFC Azure CSV, FTW SQL LOL

But the Two main options on SQL for clustering are :

An FCI is a single instance of SQL Server that is installed across Windows Server Failover Clustering nodes and, possibly, across multiple subnets. On the network, an FCI appears to be an instance of SQL Server running on a single computer, but the FCI provides failover from one Windows Server Failover Clustering node to another if the current node becomes unavailable.

An FCI can leverage AlwaysOn Availability Groups to provide remote disaster recovery at the database level. 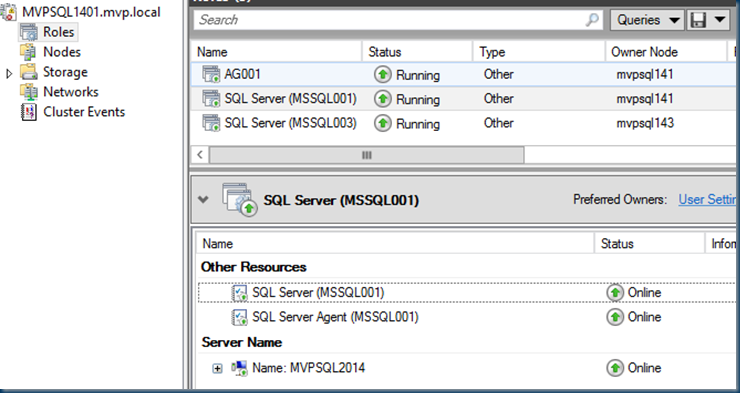 When a SQL Server instance is configured to be an FCI (instead of a standalone instance), the high availability of that SQL Server instance is protected by the presence of redundant nodes in the FCI. Only one of the nodes in the FCI owns the Windows Server Failover Clustering resource group at a time. In case of a failure (hardware failures, operating system failures, application or service failures), or a planned upgrade, the resource group ownership is moved to another Windows Server Failover Clustering node. This process is transparent to the client or application connecting to SQL Server and this minimize the downtime the application or clients experience during a failure.

By implementing AlwaysOn SQL Server FCI an availability replica can be hosted by either a standalone instance of SQL Server or an FCI instance. Only one FCI partner can host a replica for a given availability group.

You might need to configure a Windows Server Failover Clustering (WSFC) cluster to include shared disks that are not available on all nodes. For example, consider a WSFC cluster across two data centers with three nodes. Two of the nodes host a SQL Server failover clustering instance (FCI) in the primary data center and have access to the same shared disks. The third node hosts a stand-alone instance of SQL Server in a different data center and does not have access to the shared disks from the primary data center. This WSFC cluster configuration supports the deployment of an availability group if the FCI hosts the primary replica and the stand-alone instance hosts the secondary replica.

The following lists some key benefits that AlwaysOn Availability Groups provide ( depends on your configuration ): 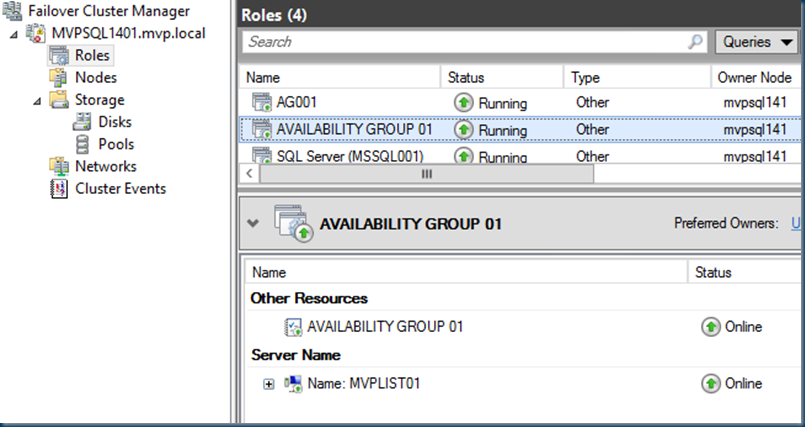 As the screenshot shows it hold a availability group with a listner. The configuration is only visible in the SQL server manager

This sounds great new options more but how to configure them and how about Azure In the next post I will show you how to create all this.

In the following I created a Cluster connected to azure with a Site to Site VPN. And will show you the HA options this will be in several steps else it would be a long post.

But along the choices there are a lot of options that can be a problem with your configuration or maybe not the best option. And maybe you need a 3th party product the get the job done. Like Datakeeper my fellow Cluster MVP David Bermingham is SteelEye’s Director of Product Management.

In the next part I will start with AlwaysOn Failover Cluster Instances (SQL Server) Followed By AlwaysOn availability group (SQL Server) and Azure Failovers.